← Back to portfolio
Published on 26th October 1995 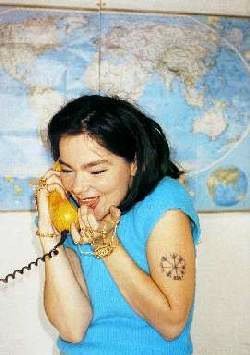 Mythic Voices: A conversation with Bjork

"Rock is dead,'' declares Bjork, speaking to me from a hotel room in Brussels. Across seven time zones she explains herself, hoarsely rolling her r's, Icelandic style, her voice a fusion of British street kid and Norse princess.

"I want to be true to my surroundings. Rock 'n' roll was invented in America, in the '50s, when everybody was driving really big Cadillacs, and you could hear these "rooom, rooom'' (she growls into the phone) noises, and people made music out of that,'' she says. "That's what people have always done. A thousand years ago in Africa, they made flutes that resembled noises of the birds around them. Pop music is the magic of taking all the noises that you live your daily life, 9 to 5 to, all week, and making a song out of it."

She pauses, and I hold my breath. Bjork seems to be giving me some kind of private songwriting lesson, and I don't want to miss a word.

"If you, in your town, would close your eyes and walk down the main street, and think, `What noise do I hear?', you'd hear a little bit of really silent cars, you hear mobile telephones, you hear car alarms and sirens, human voices, you can hear birds, you can hear wind, along with airplanes, helicopters, the counter in the supermarket ... this is what we should be making pop music out of today,'' Bjork says. "This is what I was brought up with. I was born in 1965, and that's why on "Debut'' and "Post'' we have all those techno noises. But there's no '50s Cadillacs out there, none at all. So you see? Rock is dead.''

Bjork doesn't just come from Iceland but draws deep inspiration from (and retains a close connection to) her home country. With a population hovering around 300,000, this island in the middle of the North Atlantic Ocean is a mix of snow-topped mountains, active volcanoes, glaciers and green valleys. Every home and business in Iceland is heated entirely by natural underground hot springs, leaving the air and water pristine and the life expectancy one of the highest in the world. Because of this, Bjork disagrees with the commonly held (American?) view that the environment has gone to hell. She believes nature always will be much stronger than humans.

"In Iceland ... it's still in the making,'' she says. "All the volcanoes, eruptions and blizzards and everything keep you awake and remind you how little you are.''

Though she now lives in London with her young son, she chose it specifically because of its proximity to Iceland, just a two-hour plane ride away.

"There's something calming and confident about Iceland,'' she said. "Whereas the energy in the U.S. isn't confident at all. America has tons of energy, and I really like that, but it's a very different energy, very brand-new, hard to control.''

Bjorkrecorded "Post'' in Compass Point, the Bahamas, because her accountant told her she'd save a lot of money. She took advantage of her location by recording vocals while standing in the surf, under the moon.

"In the evening, you can do your vocals on the beach, and that's how I learned to sing, basically walking around Iceland and running and singing,'' she says. "Because being inside a studio, with terrible brown colors everywhere and all that hippie wooden stuff, standing there with headphones, you might as well have handcuffs as well. It's terrible, and it's got absolutely nothing to do with feeling nice. It doesn't matter how many bottles of champagne they'll push in there; it will always just feel terrible.''

"But now I've done that, you see, and now I've dealt with it,'' she continues. "I've done experimental techno music, been in a heavy-metal band, done music to films, jazz things, punk things, all these different things, and all these things just needed a place. And now I've found a place for them, and they'll always be there. It's like photo albums. Now I've put all these photos in these books, so I don't need them anymore, and I can focus back on 1995 or 1996 ... on the music that's going on inside my head now.''

Besides serving as her own manager, she runs her record label in London (Elektra merely distributes her CD in the States) on which "Post'' was released. Here's how she deals with American record labels whose main concern is the bottom line:

In ancient Norse myths, metaphors were a central part of the mythology and storytelling. The native Skaldic poetry was actually a series of metaphors, inside which myths were concealed. Bjork, in true Icelandic form, answered many questions with metaphors.

On the U.S.: "It's a bit like surfing, isn't it? It's very easy to go underneath the wave and just get crashed, and every time I visit Manhattan, it's like that. You have to surf on top of it.''

On reading her reviews: "If I was a building, I could see myself from the inside, and I know I've got pink walls and wooden doors. But if someone sees me from the outside, I may be a red building.''

On the recording process: "I compare it to hunting an animal in the forest. Where do you put the trap? You sort of know where the animal will run. You just put it somewhere and wait. And you get more clever with it over the years, but you still can never control the animal.''

For all her fantastical musings and sometimes over-the-top image, Bjork is not an ivory-tower performer who must be shielded from reality. On the contrary, she gets her inspiration from the real world. "I don't believe in escapism,'' she says. "I accept the life I'm living in, and I see the magic in it. I think that's just so powerful. Nothing can beat that, really.''